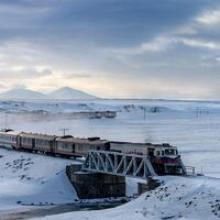 With the winter approaching, the demand for seats on the Eastern Express, a train service that links the capital Ankara with the eastern province of Kars, has surged again, as the number of tickets sold so far for the winter months reached 10,000. Click through for the story in photos...

Ski tracks surrounded by Scotch pine forests and natural beauty attract thousands of visitors to the Cıbıltepe Ski Center in the Sarıkamış district of the northeastern province of Kars.

Thousands of people marched on Jan. 7 in the eastern province of Kars to commemorate the tens of thousands of Ottoman soldiers killed in the Sarıkamış operation during the First World War, state-run Anadolu Agency has reported.

Turkish Transportation Minister Ahmet Arslan said on Dec. 31 that a surge in demand for seats on the Eastern Express, a train service that links Ankara with the Eastern province of Kars, could mean adding more wagons to the line.

The four-and-a-half century-old Beylerbeyi Palace in the eastern province of Kars is being restored to open as a boutique hotel in 2018, Kars Governor Rahmi Doğan said.

Ayhan Bilgen, a Peoples' Democratic Party (HDP) lawmaker for the eastern province of Kars, was released on Sept. 8, nine months after he was arrested as a part of a terror investigation.

Bilgen was detained early on Jan. 29 in the Esenboğa Airport in Ankara and taken to the southeastern province of Diyarbakır.

Chief of General Staff Gen. Hulusi Akar visited a unit on the border with Syria in the southeastern province of Gaziantep on Sept. 1 on the first day of Eid al-Adha (Feast of Sacrifice) holiday.

Agriculture and Livestock Minister Ahmet Eşref Fakıbaba accompanied Akar during the visit, greeting soldiers on duty at the 8th border command in the town of Birecik in Gaziantep.

The ancient city of Ani, located on the Turkish-Armenian border and called the "cradle of civilizations" as it has been home to many ancient civilizations, has doubled its number of visitors after its registry in the UNESCO World Heritage list.

We carry the same name: Brigadier Gen. Murat Yetkin used to be the commander of the 9th Commando Brigade in Sarıkamış, in the northeastern border province of Kars, until the military coup attempt of July 15-16, 2016.