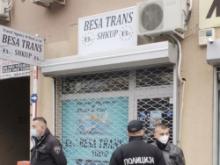 A witness at the trial for the 2018 killing of Kosovo Serb political party leader Oliver Ivanovic, told Pristina Basic Court on Wednesday that he wanted to change the testimony he previously gave to Kosovo's Special Prosecution.

The witness, who the judges asked media not to name for security reasons and to avoid witness-tampering, said he made the decision because he is afraid.

Ksenija Bozovic, who was the vice-president of Oliver Ivanovic's Freedom, Democracy, Justice party, declined on Tuesday to tell Pristina Basic Court the names of organised criminal groups which the slain politician warned her about before his murder in Mitrovica in Kosovo in January 2018.

Three years after the initial indictment for the murder of Kosovo Serb political party leader Oliver Ivanovic, the first witness was heard in the trial at Pristina Basic Court on Monday.

Kosovo's public reacted angrily on Sunday after the Minister of Local Government, Elbert Krasniqi, reported that a bar in the western town of Gjakove/Djakovica had refused to serve a group of youngsters belonging to minority communities.

Svetomir Bacevic stands accused of seizing a 60-year-old ethnic Albanian civilian from her home in the village of Bellopje/Belo Polje in Kosovo's Peja/Pec municipality in the summer of 1998, according to the indictment which has been obtained by BIRN.

The exhibition entitled 'A Grave is Better Than Not Knowing' opened on Thursday at the Youth Palace in Pristina, intended as a call to authorities to step up efforts to shed light on the fate of those who went missing as a result of the 1998-99 Kosovo war.

There is growing concern in Kosovo over the government's pursuit of an initiative to vet judges and prosecutors, which, if mishandled, could backfire.

The United States was never a big fan of Albin Kurti. Then he became prime minister of Kosovo.