Twitter, which turns 10 years old on March 21, has grown into one of the leading global social networks. Here are some key facts about the messaging platform:

Twitter came to life on March 21, 2006, when co-founder Jack Dorsey sent out the first tweet: "just setting up my twttr." Dorsey followed up with the first "human-generated" tweet: "inviting coworkers."

Marine theme-park giant SeaWorld announced on March 17 it will stop breeding orcas, also known as killer whales, and will no longer keep any of the giant sea creatures in captivity after its current generation dies.

A Silicon Valley tech titan has been sued for $40 million by a woman who claims he used her as a sex slave for 13 years.

Michael Goguen, who had worked for a firm that funded Google and Paypal, had been “sexually and physically” abusing Amber Laurel Baptiste over more than 13 years after meeting her at a strip club in Texas, her lawsuit alleges.

A new study suggests that there is a correlation between lung cancer with increased intake of carbohydrates. The study conducted by the University of Texas under the guidance of Dr. Stephanie Melkonian of the ‘Anderson Cancer Center’  revealed that people with higher levels of sugar in their blood have 49 per cent more probability of developing lung cancer.

Republican Donald Trump and Democrat Hillary Clinton took big steps toward securing their parties' presidential nominations  on March 1 with a series of state-by-state victories, but their rivals vowed to keep on fighting.

On Super Tuesday, the 2016 campaign's biggest day of nominating contests, Trump, 69, and Clinton, 68, proved themselves the undisputed front-runners. 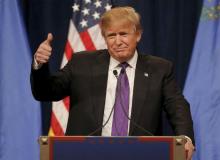 Donald Trump stormed to victory in Tuesday's Republican caucuses in Nevada, giving the billionaire businessman his third straight win in the race for the White House.

Republican presidential front-runner Donald Trump grabbed a big win in the South Carolina primary on Feb. 20, while Democrat Hillary Clinton breathed life into her sluggish campaign with a victory over Bernie Sanders in Nevada.

The Greek island of Hydra is included in the secret getaways for the art world’s super rich, according an article published on Forbes magazine.

Brazil is signing an agreement with the University of Texas to develop a vaccine against the Zika virus, the country's health minister said on Feb. 11, adding the goal is for the vaccine to be ready for clinical testing within 12 months.

A collection of rare and never-seen-before photos of Hollywood star Marilyn Monroe taken by one of her most devoted fans in the 1950s is up for auction.

The 183 images are included in the personal collection of James Collins which was a member of the ‘Monroe Six’, a group of fans who followed Monroe so often that she gave them special access into her life, as Daily Mail writes.