Turkish Prime Minister Ahmet Davuto?lu, who is New York for the 70th United Nations General Assembly, has met with 14-year-old student Ahmed Mohamed, who was detained at school by the police in Texas when a teacher thought a clock he had made was a bomb. 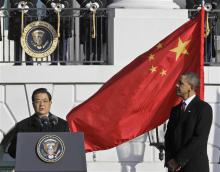 An American woman suspected of spying is being investigated, China's Foreign Ministry said on Sept.22, as President Xi Jinping left for the United States on an official visit.

Sandy Phan-Gillis, of Texas, has been held by Chinese authorities for about six months and is suspected of spying and stealing state secrets, according to a statement from her family released this week.

A Muslim teenager arrested after a Texas teacher mistook his homemade clock for a bomb won invitations to the White House, Google and Facebook on Sept.16 in a surge of public support.

President Barack Obama congratulated Ahmed Mohamed, 14, on his skills in a pointed rebuke to school and police officials -- who defended his arrest -- amid accusations of Islamophobia.

The Bulgarian National Bank has to change the way it publishes information about the banking system in Bulgaria, renowned economist Prof Steve Hanke has said.

He has warned the BNB of putting out "very aggregate statistics", with information about bigger and smaller banks all "lumped together" a practice from which data suffers, preventing a thorough analysis of the system.

Ahmed Mohamed, the 14-year-old high school student in Irving, Texas who was arrested in a classroom on Monday after a teacher mistook his homemade clock for a bomb, has attracted admiration from a former secretary of state, a NASA scientist and even US President Barack Obama.

A study from Texas Tech and the University of Nevada found that infidelity is hereditary. The researchers surveyed 300 students and questioned them about their parents’ relationships to test their own likelihood to commit the same relationship crime. 30% students said they had cheated on a partner at least once while 33% of participants confided that their parents had been unfaithful.

One man was killed and another seriously wounded in a shooting at a Sacramento, California college campus, police said late on Sept.3.

"Campus is clear... investigation is underway," Sam Somers, police chief in the California capital city said in a tweet, adding that the lone suspect in the case remains at large.

The high-altitude thriller "Everest," which opened the Venice Film Festival on Sept. 2, should warn a lot of people off mountain climbing as two Turkish directors feel the thrill for prizes at the prestigious event.

President Barack Obama vowed on Aug. 31 to push for police officer safety after a Texas sheriff's deputy was gunned down from behind and shot multiple times at close range.