Unlike Mark Twain?s experience with New York, returning to Washington D.C. after an absence of a mere six months in April I found quite of bit of moral decadence: Cannabis had been legalized. To my chagrin, only its consumption, but not its sale, was allowed.

An album of unreleased music by grunge icon Kurt Cobain will come out in November to accompany a documentary on the late Nirvana frontman, the director has said.

In researching ?Montage of Heck,? filmmaker Brett Morgen discovered more than 100 early cassettes recorded by Cobain, who grew up in the lumber town of Aberdeen, Washington.

Tens of thousands of people gathered in Hiroshima on August 6 to mark 70 years since the atomic bombing that helped end World War II but still divides opinion today over whether the total destruction it caused was justified.

The United States began July 30 delivery of eight F-16 fighter jets to Egypt, according to its embassy in Cairo, the first since Washington fully lifted in March a freeze on arms delivery.

If the Justice and Development Party?s (AKP) calculation, for the sake of domestic political gains, is to end the Kurdish peace process and declare wholesale war on the Kurdistan Workers? Party (PKK) under the cover of joining the U.S.-led war against the Islamic State of Iraq and the Levant (ISIL), this could leave Turkey in a worse situation than it is in today. 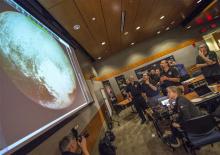 An unmanned NASA spacecraft whizzed by Pluto on July 14, making its closest approach in the climax of a decade-long journey to explore the dwarf planet for the first time, the US space agency said.

Developments in Tal Abyad, a strategic border town in Syria just south of the Turkish town of Akçakale, are proving again that developments in Syria are not determined by Ankara?s desires and needs. What we have today is more than just a victory against the Islamic State in Iraq and the Levant (ISIL).

Here’s the last paragraph of the Caucasian lady  — of German-Czech ancestry — that masqueraded as an admittedly light-skinned but very forceful African-American woman, and NAACP chapter head in Spokane, Wash. She resigned on Monday.