President Donald Trump on Friday brought a temporary end to the longest government shutdown in US history, while dropping his previous insistence on immediate funding for wall construction along the Mexican border, reports AFP.

President Donald Trump on Friday brought a temporary end to the longest government shutdown in US history, while dropping his previous insistence on immediate funding for wall construction along the Mexican border.

The U.S. Senate narrowly approved a tax overhaul, moving Republicans and President Donald Trump a big step closer to their goal of slashing taxes for businesses and the rich while offering everyday Americans a mixed bag of changes, reported Reters.

The White House says it’s willing to strike a health-care provision from the Senate tax-cut bill if the provision becomes an impediment to passing one of President Donald Trump’s top priorities. 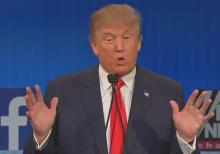 President Donald Trump plans to sack the health minister Tom Price if the US Congress does not vote again in favor of abolishing the current Obama health insurance system. Reports BGNES.

President Donald Trump is taking swipes at his fellow Republicans. In a series of tweets, the president is accusing Republicans of not protecting him and criticizing their handling of the health care overhaul.