Let us not fool ourselves. Greece will for a long time continue to shoulder by far the greatest share of the burden of the refugee crisis on its own.

An earthquake with a magnitute of 4.8 hit the Aegean province of İzmir early on Dec. 25.

A 4.5-magnitude earthquake rattled the Aegean Sea early on Dec. 8, according to an official statement.

While Greece is planning the upgrading of its F-16 fighter jet fleet, the Turkish air-force violated Greek airspace over the Aegean Sea 33 times on Friday. The violations and infringements took place by the CN-235 reconnaissance airplane over the North-eastern, central and south-eastern Aegean Sea, while there were two infringements of the Athens FIR.

Tofa?, a joint venture between Turkey's Koç and Italy's Fiat Chrysler, announced on May 3 that it made the highest volume of exports in the first three months of the year since 2010 thanks to demand for its new Aegea (Egea) model.

John Behrakis, Alkis Konstantinidis and Alexander Avramidis, the three Greek Reuters photographers who won the Pulitzer prize in the category for ‘Breaking News’, managed to convey the ordeal and the personal stories of the refugees crossing the Aegean Sea in search of a safer and better life for them and their families.

Turkish and Greek diplomats will continue to discuss finding ways to resolve the decades-old Aegean problem and draw a border in the Aegean Sea.

Several shops around the Turkish port of Izmir are seeking to cash in on a flood of would-be immigrants trying to reach Greece by selling life vests, according to local news reports. 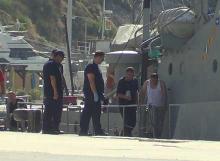 Two migrants were found dead and 11 rescued late on Thursday after the boat they were sailing in from Turkey sank off Samos in the eastern Aegea. Another 22 were thought to be missing.