This was confirmed by the Taliban government spokesman Bilal Karimi. He did not present the details, but stated that there's an ongoing investigation.
According to the first reports, it was a suicide striker in the mosque known as Imam Bargah.
The footage attached to this text may contain disturbing content.

The Taliban warned the United States not to "destabilize" the regime on Oct. 9 during their first face-to-face talks since the U.S. withdrawal, as a deadly sectarian bombing raised further questions about their grip on power.

Turkey on Oct. 8 condemned the terror attack targeting a mosque during Friday prayers in Afghanistan's northern province of Kunduz.

An extraordinary meeting of the Group of 20 major economies to discuss Afghanistan will take place on 12 October, Italian PM Mario Draghi announced on Wednesday, Reuters reported.

The top U.S. military officer called the 20-year war in Afghanistan a "strategic failure" and acknowledged to Congress that he had favored keeping several thousand troops in the country to prevent a collapse of the U.S.-supported Kabul government and a rapid takeover by the Taliban.

A prominent leader of the Taliban has said the group will reintroduce punishments such as amputations and executions for criminals, though perhaps not publicly. 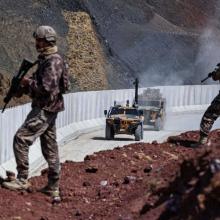 Some of the refugees fleeing the Taliban's brutality in Afghanistanare taking an arduous route across neighboring Iran to try and cross into Turkey. We met a family in the Turkish border city of Van who made it out of Afghanistan the night before the capital fell to the Taliban.

One of the founders of the Taliban and the chief enforcer of its harsh interpretation of Islamic law when they last ruled Afghanistan said the hard-line movement will once again carry out executions and amputations of hands, though perhaps not in public.

The Turkish ambassador to Qatar met on on Sept. 23 the acting deputy foreign minister of Taliban administration in Afghanistan, the Turkish Embassy in Doha said.

The European Union will focus on humanitarian aid as it figures out how to deal with the Taliban, aiming on an informal arrangement with Afghanistan's new rulers to ensure safe aid corridors, four diplomats and two officials said.