Protesters were defiant on the streets of Sudan on Oct. 26 demonstrating against a military coup, as international condemnation of the country's security forces ramped up with the U.N. Security Council expected to meet later.

"Returning to the past is not an option," chanted the crowds, who remained outside despite soldiers opening fire and reportedly killing at least four people.

Sudanese officials say military forces have detained at least five senior government officials, and the main pro-democracy political group has called on people to take to the streets to oppose an apparent new military coup, according to Britain's The Guardian.

Joint military forces were behind the detention on Oct. 25 of civilian members of Sudan's ruling council and ministers in the transitional government, the information ministry said, in what activists denounced as a "coup".

Turkey's top diplomat has reiterated its support to Libya and underlined that the upcoming elections slated for the end of this year should be held in a free, fair and credible manner.

The ceremonial opening of the Commemorative Session at the Belgrade Fair, at which the President of Serbia will address as the co-host of the Commemorative Gathering, is scheduled for 9:30 a.m., the Office for Media relations of the President of the Republic of Serbia announced.
After that, the plenary session will begin at 10 a.m., at which the heads of delegations will address. 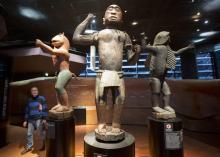 France will give back 26 artworks, including royal thrones, ceremonial altars and revered statues to Benin later this month, part of France's long-promised plans to give back artwork taken from Africa during the colonial era.

Turkey expressed its condolences to the Democratic Republic of Congo (DRC) on Oct. 9 over a deadly boat disaster in the country's northern Bumba region.