This was done after the services warned of security threats during the inauguration of President-elect Joe Biden next week.
The state of emergency was declared by the mayor of Washington, Muriel Bowser, last Wednesday, after the incursion of the demonstrators into the Congress, because after that, information about the planned riots during the inauguration began to appear.

Four people died Wednesday amid the riots at the U.S. Capitol building, Washington, D.C., as a horde of supporters of President Donald Trump sought to prevent the confirmation of Joe Biden's electoral victory.

Michelle Obama bared enough for pretty much everyone in Tuscany to notice.
The former First Lady was out and about in a super revealing top — if shoulders are your thing.
Barack wore a button-down shirt casually with sleeves rolled up as he walked next to Michelle.

Barack and Michelle Obama cover the new issue of Essence magazine looking perfect as ever. But it’s not the cover shot that’s causing the most excitement, it’s this one from the shoot inside. 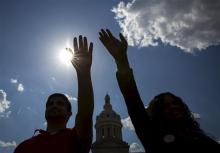 Baltimore lifted a curfew May 3 that was imposed across the US East Coast city following widespread riots, as thousands of National Guard troops began to pull out.

Thousands of police in riot gear and National Guard troops patrolled Baltimore to enforce a curfew at night, dispersing protesters with pepper spray a day after the city was shaken by the worst rioting in the United States in years.

On the third day of his visit, he will meet with the U.S. President's National Security Advisor Susan Rice at the White House.