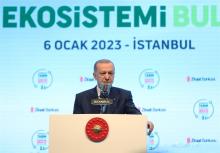 While the disruption in grain shipments to world markets due to the Russia-Ukraine crisis led to a worldwide threat of famine, Türkiye's diplomatic efforts helped prevent the problem, President Recep Tayyip Erdoğan said on Jan. 6.

Massive economic losses brought on by extreme heat induced by human-driven climate change are an issue now, not only in the distant future.

Following Interior Minister Süleyman Soylu's statements on Amanos Mountains in Türkiye's south that it has been cleared of terrorists, the region is expected to be opened to ecotourism, according to the Regional Directorate of Forestry.

The Amanos Mountains, in which the security forces have actively struggled against the PKK since 1992, has been completely cleared of the terrorism.

The Turkish Grain Board (TMO) bought a record amount of over 5 million tons of wheat and over 1 million tons of barley this year, after the global food security rush due to both the pandemic and the Ukraine-Russia war.

New Zealand's government yesterday proposed taxing the greenhouse gasses that farm animals make from burping and peeing as part of a plan to tackle climate change.

The government said the farm levy would be a world first, and that farmers should be able to recoup the cost by charging more for climate-friendly products.

Despite the unfavorable developments globally, there are no risks to food supply security in Türkiye thanks to measures in place, said the Food and Agricultural Products Monitoring and Assessment Committee in a statement on Sept. 14.

World food prices have fallen for a fifth consecutive month, partly thanks to the resumption of exports from Ukraine's Black Sea ports, a UN agency said on Sept. 2.

Nearly 150,000 workers at more than 200 Bangladeshi tea plantations went on strike Saturday to demand a 150 percent rise to their dollar-a-day wages, which researchers say are among the lowest in the world.

Most tea workers in the overwhelmingly Muslim country are low-caste Hindus, the descendants of labourers brought to the plantations by colonial-era British planters.