The fighting in civil war-torn Libya has split many families apart, with some survivors now thinking of moving to Turkey.

Greece safely evacuated embassy staff and more than one hundred Chinese and European nationals from Libya early on Friday with a navy frigate sailing back to the Greek port of Piraeus, its Defense Ministry said.

Athens had sent a frigate and two other vessels to Libya to evacuate workers at its embassy in Tripoli on Thursday.

With the violence in Libya escalating to its worst level since the 2011 ouster of dictator Moammar Gadhafi, governments from around the world are scrambling to evacuate their citizens from the country, many seeking help from nearby Greece.

Islamist-led militiamen have stepped up their assault on Libyaâs main airport, controlled by rival fighters, which the Health Ministry said July 21 had left at least 47 dead in a week.

The fighting, which erupted on July 13 and shut Tripoli international airport, also injured 120 people, according to figures for the week until July 19.

Heavy fighting broke out July 13 between rival militias vying for control of Libyaâs main airport, killing at least three people and forcing a halt of all flights in the worst fighting in the capital for six months.

Explosions and anti-aircraft gunfire were heard from early morning on the airport road and other parts of Tripoli. 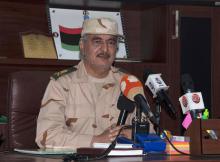 A Libyan renegade general has called on all Turks and Qataris to leave volatile eastern Libya, accusing the two countries of supporting âterrorism,â his spokesman said June 22.