Afghanistan's state-run news agency says at least 255 people have killed in an earthquake that struck the country's eastern Paktika province.

Ljubljana – Slovenian police recorded 4,333 attempts at illegal crossing of the border in the first five months of the year, which is 75% more than in the same period last year, when 2,466 such attempts were recorded. Afghanis account for almost a quarter of those intercepted, the police statistics show. 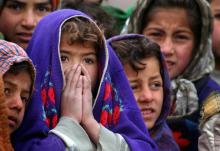 UN Deputy High Commissioner for Refugees Kelly T. Clements has called on the Taliban to discuss the plight of Afghan refugees and their return to the soil as many of them flee the war-torn nation when it seized power in Afghanistan last year.

The arrests were announced by Norway's police on Wednesday and then confirmed by the Bulgarian authorities.

Both detainees are Norwegian citizens. One arrest took place in Oslo, Norway, while the other was in Stara Zagora, Bulgaria. The arrest in Bulgaria was done on a warrant issued by the Public Prosecutor's Office of Norway.

The Taliban members who killed her activist husband offered Zahra Husseini a deal: Marry one of us, and you'll be safe.

Husseini, 31, decided to flee. Through swaths of lawless flatlands she and her two small children trekked by foot, motorcycle and truck until reaching Iran.

Afghanistan's main universities have reopened six months after the Taliban returned to power, but only a trickle of women went back to now-segregated classes.

The Taliban insist they will allow girls and women to be educated this time around, but only in segregated classes and according to an Islamic curriculum.