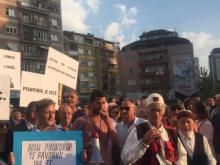 A street protest joined by opposition party supporters in Pristina on Wednesday demanded the resignation of the Chief Prosecutor, Aleksander Lumezi, over claims that he was undermining the fight against corruption. 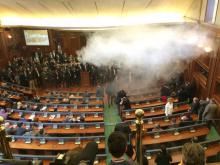 They received between 14 and 18 months in jail for repeatedly releasing tear gas in the Assembly hall, but will not go to jail unless they re-offend over the next two years. 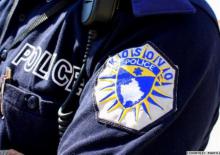 Albin Kurti, a member of the Kosovo Assembly from the opposition Self-Determination, has been arrested.

The arrest took place in front of the Assembly, Tanjug is reporting on Friday, citing RTK2.

Two other Self-Determination members of the Assembly, Albulena Haxhiu and Donika Kadaj-Bujupi, have also been arrested.

The arrest took place in front of the Assembly, Tanjug is reporting on Friday, citing RTK2.

Two other Self-Determination members of the Assembly, Albulena Haxhiu and Donika Kadaj-Bujupi, have also been arrested.

The Kosovo police announced on Wednesday they were looking for Kurti, after the Basic Court in Pristina issued a warrant for his arrest, local media reported. 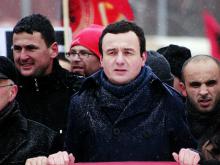 A court in Kosovo has issued an arrest warrant for MP Albin Kurti, one of four MPs from Vetevendosje accused of letting off teargas in parliament last year, after he failed to show up for his trial in the capital Pristina.

A judge told the hearing that he would issue the warrant for Kurti's detention to secure his presence in court. 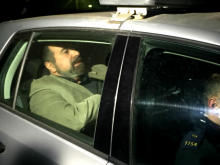 Police in Kosovo have now detained more than a third of opposition MPs following Monday's unrest, when MPs again disrupted parliament by setting off tear gas on two separate occasions.

The Basic Court in Pristina has issued warrants for the arrest of four opposition members of the Kosovo assembly.

They are Albin Kurtin, Albulena Haxhiu and Faton Topalli from Self-Determination, and Donika Kadaj Bujupi from the Alliance for the Future of Kosovo. 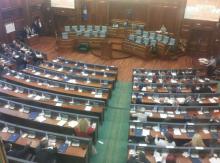 A document in Cyrillic was rejected on Monday during a meeting of the Kosovo parliament's commission for legislation, with its head Albulena Haxhiu saying that the format was not "typical" and requesting a legal interpretation of the issue.