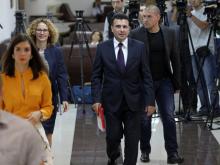 In a short press statement issued after the meeting, Macedonia's four main party leaders said only that they had met to discuss details about the government that will prepare snap elections.

The deal was agreed on June 2 with the mediation of the EU Enlargement Commissioner, Johannes Hahn. 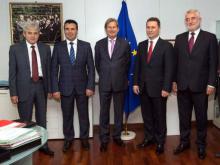 Macedonia's warring political leaders hold a new meeting on Monday in the hope of reaching an agreement on a transition government that will lead the country into early elections due to take place by next April at the latest.

The key question is whether Prime Minister and VMRO DPMNE leader Nikola Gruevski will step down ahead of the polls.

About 2,000 ethnic Albanians marched in Macedonia's capital, Skopje, on Saturday, demanding redefinition of their status and the resignation of Prime Minister Nikola Gruevski, newswires reported.

The marchers also called for the resignation of Gruevsi's junior government coalition partner, the ethnic Albanian DUI led by Ali Ahmeti, to open the way for early elections.

No early elections will be held in Macedonia by end-April 2016 if there is no agreement on a transitional government by June 10, the country's Nova TV channel revealed on Tuesday.

Zoran Zaev, leader of Macedonia's opposition Social Democrats, expects the political crisis in the country to be resolved by the end of June. 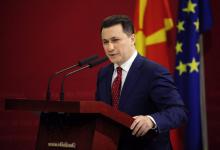 Heads of four parties held another round of talks in the country's capital Skopje amid a political crisis, with socialist opposition leader Zoran Zaev demanding the government's resignation in a wiretapping scandal.

The second meeting of the leaders of Macedonia's four biggest political parties aimed at resolving the political crisis in the country ended inconclusively on Monday, telma.mk reported.

The leaders agreed to meet again on 26 May.

The leaders of Macedonia's four biggest political parties met on Monday in a fresh attempt to ease tensions and find a way for resolving the months-long political crisis.

"All of you, take to the streets to protest on Sunday," BGNES wire service quotes him as saying in an interview with Alsat-M TV channel.

The leaders of the four biggest political parties in Macedonia have agreed to continue their talks on Monday to make another attempt to ease political tensions in the country, MIA news agency reported.