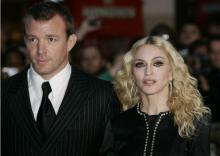 A judge at England's High Court on March 21 pleaded with US pop megastar Madonna and her British film director ex-husband to resolve a legal dispute over their son Rocco amicably.

The fan whose breast was exposed by Madonna in front of thousands of people during the pop star’s concert at Brisbane said that she was not insulted by what happened.

Josephine Georgiou, 17, is of Greek origin and said she was shocked by the worldwide attention the clip of Madonna pulling her top gained and said it was a simple wardrobe malfunction, as Courier Mail reports.

It seems that famous pop star Madonna is having a bad time due to the fight she gives with ex Guy Ritchie over their 15-year-old son, as she appeared drunk on stage during her performance in Melbourne.

Madonna kicked off her performance four hours late by arriving on stage riding a child’s tricycle dressed as a clown.

We all have photos from their childhood that we would prefer they had never been shot.

Pictures of us dressed in embarrassing outfits or in awkward situations.

See some of the most awkward, comic and endearing photos of celebrities at their high school proms.

The stunning 42-year-old model knows what to do to attract the attention and in order to promote her lingerie line, Heidi Klum posted a sexy shot of her on Instagram.

She uploaded a sexy black-and-white photo wearing nothing but a lacy thong and captioned the snap, “Love being cheeky in my Heidi Klum Intimates.”

Madonna halted a concert in Sweden to pay tribute to the victims of the Paris Attacks. The 57-year-old singer took a moment to acknowledge the tragic killings. She revealed that she had considered canceling the concert out of respect for the victims.

We have seen the 46-year-old performing, acting and judging in a reality show. Now, we will have the chance to admire her in a new role: She will present the American Music Awards.

Jessica Alba is one sexy lady! The 34-year old actress and successful businesswoman has it all going for her, especially those genes. Check out these sexy bikini photos.

Katy Perry made a guest appearance during the red carpet premiere of a movie dedicated to the life of her close friend-designer Jeremmy Scott at the ‘TLC Chinese Theatre’. The interest of the relatively boring premiere ‘skyrocketed’ after sexy Katy kneeled down to place her palms imprints in the ‘Hall of Fame’.