What someone can see while visiting the Acropolis

He became the 2nd Greek after Demosthenes Tabakos (gold, silver) with 2 medals in the rings 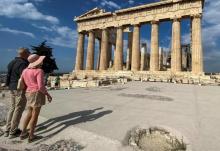 Controversy has engulfed an ambitious restoration project on the Acropolis, with critics accusing the Greek government of spoiling the country's priceless heritage.

Most of the fire has been directed at a new concrete walkway unveiled in December, which main opposition leader Alexis Tsipras said constitutes "abuse" of Greece's most vaunted archaeological site.

The Athens Ephorate of Antiquities (EFA) has embarked on one of its greatest challenges, tackling the restoration of the 6th century BC Temple of Olympian Zeus, one of the great monuments of the ancient world.

Fireworks explode over the ancient Parthenon temple atop the Acropolis hill during New Year's day celebrations, amid the coronavirus disease pandemic in Athens, January 1. With vaccinations against Covid-19 having begun, Greece and the world looks ahead to 2021 with hope after a turbulent year. [Reuters]

Delic stated that the decisions of the Crisis Staff and the easing of measures seem unconvincing and do not instill confidence. He also told his decision-making colleagues for Nova.rs portal to stay true to their profession and the Hippocratic oath they took.

When the allied Greek cities found themselves facing the invading Persian Army in 480 BC, it was an existential battle between East and West. Greece, representing all the values of the West, as we know it today, used its "wooden walls" - its ships - to face the Eastern invaders.