Brdo pri Kranju – President Borut Pahor on Tuesday presented German Chancellor Angela Merkel with the Order of Merit for Distinguished Service, Slovenia’s highest honour, for her personal contribution to deepening the relationship between the two countries and for her credible and trust-inspiring European leadership.

Berlin-based analysts and policymakers expect to see a shift in Germany's - and therefore the EU's - approach to the Western Balkans with the end of the Merkel era. 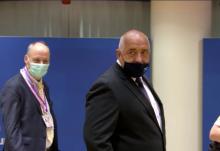 An SPD-led government in Germany has significant potential to sharpen international attention to the problems of corruption in Bulgaria. This could create big issues for former Prime Minister Boyko Borissov and his GERB party (EPP), which is trying to find ways to return to power.

Namely, the long-term political stability of Germany under Angela Merkel, who as an unofficial European leader helped manage a series of political and economic crises on the continent, is over, and after the elections it seems that a weak and compromise coalition will be formed.

Eighteen candidates of Turkish descent have been elected as lawmakers in Germany's federal parliament, Bundestag, in the country's elections that took place on Sept. 26.

The SDP receives 25.7 percent of the vote, its best result in years.