Instruments that have been used by the Presidential Symphony Orchestra (CSO) throughout its nearly 200-year history, various documents and belongings of the orchestra are presented to the visitors at the CSO1826 Exhibition Area in Turkish capital Ankara.

Bulgaria's ambassador to Turkey, Angel Cholakov, was summoned to an emergency meeting at the Turkish Foreign Ministry late last night for talks.

Gendarmerie and Police in front of the Turkish Embassy in Sofia, Protecting it from Protests

An explosion early on Nov. 19 in an apartment building in Turkey's capital has left two people dead and four others wounded, an official said.

Speaking to reporters at the site in Keçiören district, Ankara Governor Vasip Şahin said a child and her father were killed in the blast, which caused part of the building to collapse.

The Touristic Eastern Express that runs from Ankara to the eastern province of Kars will resume operations, which were halted in March 2020, in December.

The train will depart from Ankara on Dec. 15, said Transport Minister Adil Karaismailoğlu in a written statement. 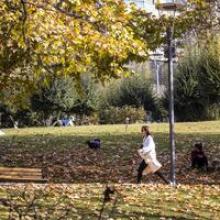 Managers of Turkey's largest defense companies underlined the importance of research and development activities during a panel in Turkey's major defense event.

The four-day event kicked off on Nov. 10.

Turkey is approaching its targets of overcoming global crisis successfully, said the country's president on Nov. 10 in his speech commemorating Mustafa Kemal Atatürk, the founder of modern Turkey, noting that the outcome of his achievements is "the road map of Turkey."

Turkey on Nov. 10 commemorated the 83rd anniversary of the passing of Mustafa Kemal Atatürk, the leader of the country's War of Independence and founder of modern Turkey, with the nation flocking to his mausoleum, Anıtkabir, in the capital Ankara and Dolmabahçe Palace, where he passed away in Istanbul in 1938.

A court in Ankara has sentenced Enver Altaylı, a former official of the National Intelligence Organization (MİT), to a total of 23 years in prison for "political and military espionage" and membership to a terrorist organization.

Altaylı was detained and arrested in 2017 as part of an investigation into the FETÖ, which was responsible for the failed coup attempt in 2016.