World leaders and others will enjoy full security and comfort during next week's G-20 Summit that will be held in the Belek resort of Antalya on the Mediterranean coast, a presidential spokesman has said.

Four people were arrested by a local court in Turkey's southern province of Antalya on Nov. 8 for ties to the production and sale of bootleg alcohol.

An Antalya court ruled the arrest of four suspects, identified only with their initials M.A, ?.Ç, ?.Y. and M.M., who were among six suspects detained in the city after 560 bottles of bootleg alcohol were seized in an operation.

The call focused on how to achieve a successful outcome at next month's climate change conference in Paris, U.N. spokesman Stephane Dujarric told reporters in New York. 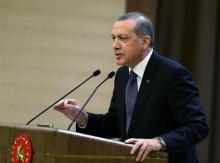 The call focused on how to achieve a successful outcome at next month's climate change conference in Paris, U.N. spokesman Stephane Dujarric told reporters in New York. 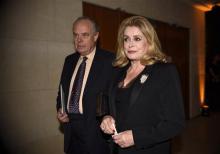 The Lifetime Achievement Award of the 52nd International Antalya Film Festival will be presented to a legendary actress in cinematic history, Catherine Deneuve.

According to a written statement made by the festival committee, the famous French actress, the festival's guest of honor, will receive her award at the opening ceremony of the festival to be held on Nov. 29.

Turkey's and Europe's first underwater museum has officially opened in Antalya. The museum displays 110 sculptures in five different themes Taking a pioneering step for both Turkey and the European continent, cultural and trade officials in the southern district of Side have cut the ribbon on a new underwater museum on the Mediterranean.

Previous G-20 summits were obsessed with growth. Then they said, "Growth is not enough; it has to be sustainable." And then the current Turkish Presidency of the G-20 asked: "Growth is important and sustainable growth even more important. But growth for who?"

The number of foreign arrivals to Turkey continued to drop in September, according to data released by the Tourism Ministry on Oct. 27.

The number of foreigners arriving in Turkey in September 2015 was 4.25 million, down 2.31 percent from the same month of previous year, according to the ministry's data.

Tourism income losses at the Mediterranean resort of Antalya will be more than $5 billion, mainly due to a sharp decline in the number of Russian tourists visiting the city, according to sector representatives.

An earthquake with a magnitude of 5.2 struck the Demre district of the southern Antalya province in the early hours of Oct. 7, with no casualties or serious material damages reported.

The epicenter of the quake, which took place at 12:27 a.m., was 34.92 kilometers below the Earth?s surface, data from Turkey?s Disaster and Emergency Management Authority (AFAD) showed.