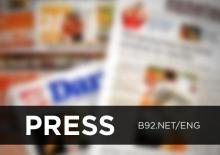 The Belgrade-based weekly NIN on Thursday apologized to all those who felt offended by the front page of its latest issue.

Officials say a group of some 10 Polish-speaking people took off their clothes, killed a sheep and chained themselves together by the main gate of the former Nazi German death camp of Auschwitz before being detained by police.

A Parliament deputy of the rightist-populist Independent Greeks (AN.EL) party, Dimitris Kammenos, received a tsunami of negative reaction over his post on Facebook, which depicts the infamous main gate of Auschwitz photoshopped to read “Menoume Evropi” (We’re staying in Europe) instead of the insanely cruel “Arbeit Macht Frei” (Work frees you), which greeted people as they were transported into

Coalition partner Independent Greeks distanced itself on Wednesday from one of its own MPs, Dimitris Kammenos (no relation to party leader and Defense Minister Panos Kammenos), who posted on his Facebook page a doctored photograph of the entrance to the Auschwitz concentration camp.