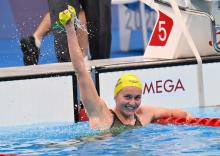 Australia's Ariarne Titmus won a thrilling 400m freestyle duel with American great Katie Ledecky in the Olympic pool on July 26 as Caeleb Dressel launched his bid for a seven-gold spree in style.

The Tokyo Aquatics Centre also witnessed a dominant 100m breaststroke swim by world record holder Adam Peaty, who defended his title to give Britain its first gold medal of the Games.