Greece's military spending has shrunk dramatically as a result of the crisis, widening the defense gap with Turkey. Successive Greek governments have spent billions on armaments over the past few decades, yet there is very little to show for it in terms of a defense industry.

The United States is preparing for its use, said the Director of the Non-Proliferation and Arms Control of the Russian MFA, quoted by NOVA TV.

Having a nuclear weapon in Europe, the United States is preparing to use it, RIA Novosti told the director of the Russian Ministry of Foreign Affairs, Vladimir Ermakov, of the Russian MFA's Directorate for Non-proliferation and Control. 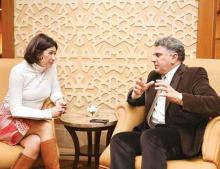 The collapse of the nuclear arms control regime can open an era even more dangerous than the cold war years, says a scholar. Turkey risks to become the setting of a crisis between Washington and Moscow according to Professor Mustafa Kibaroğlu.

The arms sales of Turkish companies rose by 24 percent in 2017, according to a report released on Dec. 10 by the Stockholm International Peace Research Institute (SIPRI).

Conflicts in the Middle East have boosted Bulgaria's arms sales in recent years to levels not seen since the fall of communism in 1989.

Turkey will chair the last session of the ongoing 2018 disarmament conference in Geneva, it was announced on Aug. 20.

Bearing in mind that 25 million people live in the region, this means that one quarter has small arms, says the director of the Belgrade Center for Security Policy, Sonja Stojanovic- Gajic.

The United States said it would boycott the June 5 session of the Conference on Disarmament amid fears that Syria is using its presidency of the body to "normalise" the regime.