Emma Thompson's naked scene in her new film about an older woman hiring a sex worker was "probably the hardest thing I've ever had to do," she told the Sundance film festival on Jan. 22.

Milan's central train station plays host from Dec. 3 to a "World of Banksy", featuring reproductions of provocative works by the British street artist in something akin to their original real-world settings. 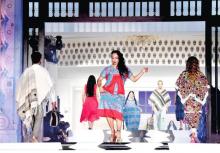 Mexico is fighting back against what it calls the plagiarism of indigenous textiles, bringing together traditional artisans and international designers for dialogue aimed at creating a more equitable fashion industry.

A 300-square-meter floor mosaic belonging to the Late Roman-Early Byzantine period has been discovered during excavation work in the Central Anatolian province of Kayseri.

An ancient mosaic that was unearthed during excavations in the southern province of Hatay will be on display in November to visitors of the Hatay Archeological Museum, the head of the museum said Oct. 21.

Even though Banksy is one of the most notable modern artists in the Western world, his identity remains a mystery

A Banksy picture which was half sliced by a shredder concealed in its frame when it was sold at auction fetched $25.4 million when it went back under the hammer in the same room in London on Oct. 14.

Onlookers gasped when the then-titled "Girl with Balloon" was sucked into a shredder as the hammer fell following a bid of $1.4 million at an October 2018 auction at Sotheby's in London.