The World Bank Group and the China-led Asian Infrastructure Investment Bank said on April 23 they agreed to deepen their cooperation with a framework for knowledge sharing, staff exchanges, analytical work, development financing and country-level coordination.

The China-backed Asian Infrastructure Investment Bank (AIIB) has approved a $600 million loan to finance a natural gas pipeline from Azerbaijan through Turkey, it said Dec. 21, taking its total loans in its inaugural year to $1.73 billion. 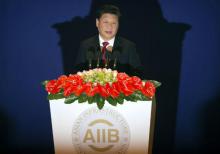 Chinese President Xi Jinping launched a new international development bank seen as a rival to the U.S.-led World Bank at a lavish ceremony on Jan. 16, as Beijing seeks to change the unwritten rules of global development finance. 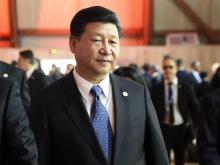 Turkey has ratified the establishment agreement of the Asian Infrastructure Investment Bank (AIIB), which was signed in June 2015.

According to a regulation, revealed in the Official Gazette on Jan. 12, Turkey will not pay more than $2.6 billion as the capital contribution to the bank.

The Turkish cabinet has also been authorized to increase this amount by up to five times.

Good evening everyone and welcome to this press conference. I was going to say that we’ve had busier turnouts – looking at the audience tonight – but it makes sense, because we also had a short Eurogroup meeting.

Japanese Prime Minister Shinzo Abe and business leaders are due to return on Oct. 28 evening from a week-long tour of Central Asia after striking business deals worth more than $26 billion.

A new $100 billion international bank dedicated to the emerging BRICS countries opened in China's commercial hub Shanghai on July 21, officials said, as an alternative to other multilateral lenders.

The "New Development Bank," backed by the so-called emerging BRICS nations Brazil, Russia, India, China and South Africa, has been viewed as a challenge to Washington-based institutions. 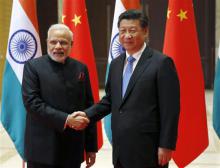 The New Development Bank, also known as the BRICS Bank, is one of two international development banks that China is promoting as an alternative to western institutions such as the World Bank.