Pope Francis personally spoke with BelÃ¶zoÄlu over the phone and the 33-year-old midfielder immediately accepted the offer, according to daily HabertÃ¼rk. 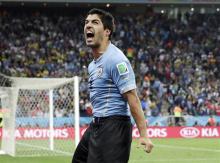 Luis Suarez on Thursday failed to win a reprieve from his four-month ban for biting Italy's Giorgio Chiellini at the World Cup, but got a green light to resume training.

Afellay, 28, joined Barca from PSV Eindhoven in December 2010 but injury wrecked his chances of establishing himself in the first team and he has only made 35 appearances overall.

The Black Eagles of BeÅiktaÅ will face a daunting task in their effort to qualify for the group stage of the Champions League for the first time in five seasons after they were paired with Arsenal in the competitionâs playoff round.

Asteras Tripolis sprung a surprise in the Europa League on Thursday, beating German side Mainz 3-1 to advance from the third qualifying round.

The side from the Peloponnese had lost the away leg 1-0 but managed to turn the score around at the Theodoros Kolokotronis stadium.

FenerbahÃ§e, BeÅiktaÅ and Chelsea will play in a charity tournament on Aug. 8 at Istanbulâs ÅÃ¼krÃ¼ SaracoÄlu Stadium for the victimsâ families of the Soma mining disaster.

The three teams will each play two games on a night of three 45-minute matches.

A Demba Ba hat-trick sent BeÅiktaÅ into the Champions League playoff round at the expense of former winners Feyenoord on Aug. 6.

The Black Eagles, who finished third in the Turkish Super League last season,
only qualified in a knock-on effect because champions FenerbahÃ§e are
serving the second of a two-year ban over domestic match-fixing in 2011.

Panathinaikos was knocked out of the Champions League on Tuesday after being beaten 2-1 at home by Belgian side Standard Liege.

The first leg in Belgium had ended 0-0 and Panathinaikos got off to a great start in Athens when Dino Arslanagic scored an own goal in the 10th minute.