The Swiss have to work only 4 days

A Let-L-1010 plane belonging to an aeroclub crashed in the city of Menzlinsk in the Russian Autonomous Republic of Tatarstan, emergency services told TASS. 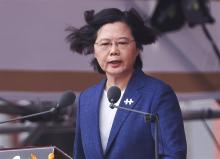 Taiwan will not bow to pressure by Beijing and will defend its democratic way of life, President Tsai Ing-wen said on Oct. 10, following a spike in incursions by Chinese warplanes into its air defense zone.

Istanbul Airport has witnessed a historical moment while hosting the world's two biggest planes, an airliner and a cargo plane, at the same time on Oct. 5.
"World's biggest cargo plane named 'Mriya' and world's biggest airliner, an Airbus A380 type jumbo jet, could be screened at the same photo-shoot in a rare event," airport officials said.

The Turkish behaviour over the Aegean is increasingly reckless

Taiwan accused Beijing of bullying and damaging regional peace on Oct. 2 after Chinese fighter jets and bombers made their largest ever incursion into the island's air defence zone.

Beijing marked its National Day on Friday with its biggest aerial show of force against Taiwan to date, buzzing the self-ruled democratic island with 38 warplanes, including nuclear-capable H-6 bombers.

A group of European airlines agreed to refund passengers whose flights were cancelled during the COVID-19 pandemic, and committed to provide better information on passengers' rights in future.

Six of the Turkish F-16s were armed

Flag carriers of Turkey and Finland have signed a codeshare agreement to expand destinations in networks of both Turkish Airlines and Finnair.

Set to begin on Sept. 29, the deal on flights between Istanbul and Helsinki and beyond will open up new destinations for travelers, Turkish Airlines said in a statement on Sept. 23.