Davor Dragicevic's lawyer, Dragan Tolimir, confirmed to BIRN that he had received the Banja Luka prosecution's decision to discontinue the investigation against him on September 8. 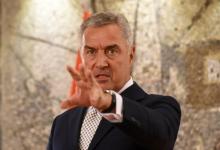 As he explained, he believes that this happened because he tried to deal with "the Serbian national line".
"This is also the symbolic end of Djukanovic's regime, which was based on quarrels, obstruction of the Serbian national being, interests and rights in Montenegro," Dodik said in Banja Luka.

Citing the statute of limitations, the public prosecution in Banja Luka told BIRN it had terminated investigations in February this year in five cases against one of more unidentified persons concerning the destruction of six mosques between March and July 1993.

"We are closely following the events in Sarajevo and Banja Luka. Making decisions from the outside could never bring good results. We will have a meeting with the representatives of Republika Srpska these days. We are not entering into the process of implementing measures and countermeasures. This is happening in another country... Still, we cannot leave Serbia without support. We want peace.

Three months later, the District Prosecution in Banja Luka ordered an investigation against unidentified persons for murder. The investigation was taken over by the State Prosecution of Bosnia and Herzegovina.

"Milorad Dodik is in Banja Luka. Yesterday, we sent a team of our doctors, headed by the CEO of the Infectious Diseases clinic in Belgrade Dr Goran Stevanovic. We are monitoring at all times," said Vui.

Milan Tegeltija, head of the Bosnian High Judicial and Prosecutorial Council, HJPC, the Bosnian state's top judicial institution, resigned on Thursday after coming under pressure from the public and the international community over alleged influence-peddling.

The Bosnian state prosecution said that seven people were arrested on Tuesday on suspicion that they committed crimes against humanity in the spring and summer of 1992 when they were Bosnian Serb Army soldiers.

According to Stanivukovic, Dodik will try to change the regulations in the Republika Srpska, establishing the new position of city "manager" who would be appointed by the city council and hold all effective powers.