Ukraine lodged an official protest on Wednesday, after Bulgaria's parliament criticised a planned reform to divide the Bolhrad region in Ukraine's southern Odessa district into five sections. The area is home to a large ethnic Bulgarian community.

May 6, 1990 saw the first "flower bridge" thrown open across the Prut River as part of the border-opening events with the Moldavian Soviet Socialist Republic (SSR). 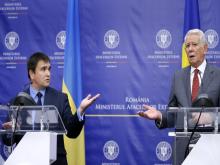 Requests for Romanian citizenship in Ukraine's Odessa region have doubled since the start of 2017, which analysts say might cause further tension with Bucharest - already angered by the adoption of language laws promoting Ukrainian in 2017.

Bucharest scrapped its consular fees for passports in 2017, which had amounted to around 300 US dollars.

All official institutions in Moldova lowered the national flag on Friday in a mark of respect for the victims of the second and biggest wave of deportations from Soviet-occupied Bessarabia that Stalin ordered on the night between June 5-6, 1949. 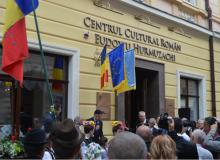 The Romanian foreign ministry expressed concern on Tuesday about the rights of the Romanian community in Ukraine after a raid by the Ukrainian security service the previous day on a Romanian cultural centre in Chernivtsi, Northern Bukovina.

The raid has sparked new tensions between Kiev and Bucharest over Romanian minority rights in the former Soviet state.

Minister for Romanians Abroad Natalia-Elena Intotero, who is paying a working visit to the Republic of Moldova, had a series of meetings on Thursday with representatives of the administration, denominations in Chisinau, as well as with members of the local authorities, during which she reconfirmed the support of Romania&#39;s Government for the Romanians over the Pruth River, a release sent

Culture and National Identity Minister George Ivascu delivered on Tuesday, one century since the union of Basarabia with Romania, a message of hope for a common European future to all Romanians, on both sides of the Pruth River, underscoring that dreams can become reality.

Romania&#39;s Parliament on Tuesday endorsed a Declaration for the celebration of the Union between Bessarabia and the Mother Land, Romania.

Our convergence course is currently named the European path of the Republic of Moldova, on Tuesday said President Klaus Iohannis in a message sent to Parliament&#39;s solemn session on the anniversary of a century since Bessarabia united with Romania.

Over 10,000 Moldovans attended the so-called "Great Centennial Assembly"in Chisinau on Sunday, marking 100 years since the union of what was then called Bessarabia with the then kingdom of Romania.

The unification document was signed on March 27, 1918, following the collapse of the Tsarist Empire. The Soviet Union seized Moldova back in World War II.