President Joe Biden will host a virtual summit with world leaders on the coronavirus pandemic next Wednesday, a day after he addresses the United Nations General Assembly, the White House said on Sept. 17.

Australians squirmed Thursday as US President Joe Biden thanked their prime minister for joining a major new defence alliance - but appeared to forget his name.

Instead of being feted by name for his role in the US-Britain-Australia agreement, Prime Minister Scott Morrison was initially relegated to being "that fellow Down Under". 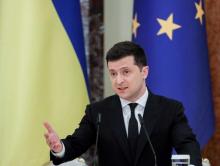 US President Joe Biden will meet with Ukraine President Volodymyr Zelensky at the White House on Wednesday in a show of solidarity between the two countries, the White House said on Sunday. The meeting is taking place two days later than originally scheduled, as Biden oversees the response to Hurricane Ida and the withdrawal of US forces from Afghanistan, Reuters reported.

President Joe Biden on Thursday vowed to make terrorists "pay" for the deadly attacks that killed 13 U.S. service members and wounded many others when ISIS militants set off multiple bombs outside of Kabul's main airport earlier in the day.

The attacks killed 60 civilians and 12 U.S. soldiers, and injured at least 140 people.
The Islamic State claimed responsibility for the attack.
"Terrorists attacked Kabul tonight," Biden said at the beginning of his address.

However, the U.S. President has not yet decided whether the withdrawal of the international forces will be prolonged due to the evacuation from the Kabul airport.
Biden is expected to make that decision in the next 24 hours. In Great Britain, however, they doubt that the evacuation will be completed by the set deadline.

Washington – US President Joe Biden has nominated prominent Columbia lawyer Jamie L. Harpootlian to be ambassador to Slovenia. She is the wife of South Carolina Senator, Democrat Dick Harpootlian.

President Joe Biden has tapped former Senator Jeff Flake to be the U.S.'s next ambassador to Turkey, the White House announced on July 13.