Former policeman Derek Chauvin was sentenced to 22 and a half years in prison on June 25 for the murder of African American George Floyd, the killing that sparked America's biggest demonstrations for racial justice in decades.

The video has sparked anger among Roma organisations and comparisons with the death of George Floyd in the US. Michal Miko, head of Romanonet - a network of Czech Roma NGOs - condemned the incident as "the height of brutality". 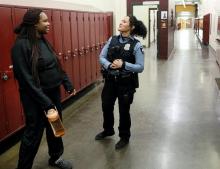 The teenager who pulled out her cellphone and began recording when she saw George Floyd being pinned to the ground by a Minneapolis police officer was given a special citation by the Pulitzer Prizes on June 11 for her video that helped to launch a global movement to protest racial injustice.

The U.S. Justice Department announced on April 21 an investigation into the Minneapolis police, a day after a white former officer was convicted of murdering George Floyd, signaling the Biden administration's intention to use federal powers to clean up systemic police abuse.

Americans anxiously awaiting a verdict in the trial of Derek Chauvin reacted with jubilation and relief on Tuesday after a jury found the former Minneapolis police officer guilty of murdering George Floyd during an arrest last May.

Former police officer Derek Chauvin was found guilty on all counts Tuesday for causing George Floyd's death, a verdict that could send him disgraced former policeman to prison for the rest of his life.

He was convicted of second- and third-degree murder, as well as second-degree manslaughter.

Now he faces up to 75 years in prison when he returns for sentencing in eight weeks.

Derek Chauvin, a white former Minneapolis police officer, was convicted on April 20 of murdering African-American George Floyd after a racially charged trial seen as a pivotal test of police accountability in the United States.

Prosecutors expect to decide on April 14 whether to charge a white former police officer who fatally shot a Black man during a traffic stop in a Minneapolis suburb, sparking nights of protests and raising tensions amid the nearby murder trial of the ex-officer charged with killing George Floyd.

Protests broke out on April 12 night after U.S. police fatally shot a young Black man in a suburb of Minneapolis - where a former police officer is currently on trial for the murder of George Floyd.