BELGRADE -- Serbian President Tomislav Nikolić and Prime Minister Ivica Dačić had separate meetings in Belgrade on Tuesday with a delegation of the Russian Federation.

The Russian delegation was led by Transportation Minister Maksim Sokolov.

"Nation that forgets history is doomed to repeat it"

BELGRADE -- Ivica Dačić on Monday laid a wreath at a memorial site on Straževica Hill near Belgrade, to mark 15 years since NATO launched its bombing campaign.

BELGRADE -- The arrest and trial of suspected drug lord Darko Šarić "will lead to a reduced role of organized crime in society," U.S. Ambassador Michael Kirby has said. 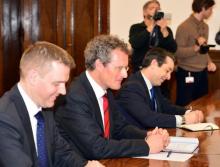 BELGRADE -- Head of the EULEX Mission in Kosovo Bernd Borchardt has said that there are "no secret indictments in Kosovo."

Miodrag Rakic, the first in the NDS (New Democratic Party) list and Nebojsa Stefanovic, the SNS (Serbian Progressive Party) Vice President are the most serious candidates for the post of the Home Minister, the Blic learns.

BELGRADE -- Aleksandar Vučić has said that a working group formed in June 2013 used "the most complex methods and resources to locate and arrest the most wanted fugitive."

BELGRADE - Serbian Progressive Party (SNS) leader Aleksandar Vucic expects his party to win more than 40 percent of the votes in the upcoming elections, but says that the figure itself is not important.

What matters is what one can achieve after the elections, Vucic told the Belgrade daily Blic.

BELGRADE -- Aleksandar Vučić has said that he expects his ruling Serb Progressive Party (SNS) to win "more than 40 percent of the vote."