Aamir Khan, the world-renowned movie star from India, gathered with his fans in southeastern Turkey on Aug. 12.

Khan stopped shooting his movie Laal Singh Chaddha, an adaption of the 1994 classic Forrest Gump due to the novel coronavirus outbreak in India, and started looking for alternative locations in Turkey to shoot his movie.

Indian actor Irrfan Khan, known for his performances in both Bollywood and Hollywood, passed away on April 29. He was 53.

"It is saddening that this day we have to bring forward the news of him passing away," a statement by his publicist read.

Indian musical 'Beyond Bollywood' will be at Zorlu PSM between Nov 26 and Dec 1. The show, realized by writer, director and dance director Rajeew Goswami, features the colorful world of India never seen before with more than 1,000 costumes.

The Dora Stratou Theater, popular for its traditional Greek dance productions, will be hosting the 7th Bollywood and Multicultural Dance Festival from July 5 to 7. Two nights of performances will feature international artists from seven countries as well as choreographic works by Greece's first Bollywood Dance Academy.

Ever since the news broke of Ayan Mukherji bringing Ranbir Kapoor and Alia Bhatt together on screen, there has been a lot of excitement surrounding the film titled 'Brahmastra'. Now having wrapped up it's shooting schedule in Bulgaria, it's Bhatt who seems to have become attached to the country.

SOFIA: An Indian fantasy Brahmāstra, the debut feature of Ayan Mukerji, wrapped shooting in Bulgaria. According to the Indian media, shooting took place at the spa resort Devin, in the Rhodope Mountains.

Filming in Bulgaria followed two schedules, in the spring and summer of 2018. The main characters are played by Alia Bhatt, Amitabh Bachchan and Mouni Roy.

New Delhi [India] July 25: Megastar Amitabh Bachchan, who is currently in Bulgaria to shoot for his upcoming project 'Brahmastra', returned 'empty handed' last night as his shoot got stalled due to heavy downpour. 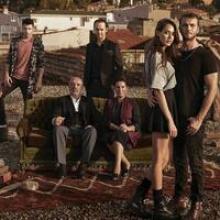 Forbes magazine has announced the top 25 highest grossing Turkish TV series of the year. Click through for the full list...

Bollywood star Salman Khan was convicted April 5 of poaching rare deer in a wildlife preserve two decades ago and could face up to six years in prison.

Alia Bhatt has injured herself on the sets of Ayan Mukerji's supernatural drama Brahmastra in Bulgaria. The big budget film has a number of intense action sequences. Alia was shooting for one of them when she met an accident.

Sofia News Agency contacted NU BOYANA film studios, the largest one in Bulgaria, for some information about the accident but they declined to comment.