Scott points out that this phenomenon is most common when it comes to reporting on Russia compared to the United States.

"I have great respect for our presidents, Boris Tadic, Vojsilav Kostunica and Tomislav Nikolic, respectively. I have a question for you - what does it mean exactly - a Hong Kong model? Who will accept this from Albanians, who have declared independence during your and Tadic's term of office? Why didn't you accept it back then?", Vucic asked at a news conference.

Markovic claimed that the protesters had a verbal agreement with the security unit to stick their demands on the Presidency doors, adding that the authorities broke the deal.

Deputy Chief of Mission at the U.S. Embassy in Belgrade, Jennifer Brush, told Voice of America that Kostunica had been notified of the attack, but had issued a police order not to respond.

The opposition gave the authorities six days to fulfill their demands.

Djuric, who also serves as director of the Office for Kosovo and Metohija, added on Wednesday that Jeremic, Serbia's former foreign minister, was part of a regime during which relations between the two nations and states had been brought to "the lowest level in history."

Djuric's reaction came after Jeremic said that Russia "supports Serbia, but not its current authorities." 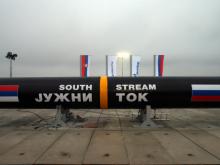 Amendments to an agreement on gas imports from Russia to Serbia, which Serbia's parliament is expected to confirm, should enable Belgrade to sell Russian gas to other countries.

BELGRADE - European Enlargement Commissioner Johannes Hahn spoke with officials of a number of Serbian opposition parties at the seat of the EU Delegation to Belgrade on Thursday.

They accused the public service of regularly breaking the law, and blocking the opposition.

None of the opposition leaders who showed up - including Dragan Djilas, Boris Tadic, Zoran Zivkovic, Vuk Jeremic, Sasa Jankovic, and Sanda Raskovic-Ivic - spoke at the gathering.