Member of the presidency of Bosnia and Hercegovina Milorad Dodik talks at the press conference. Photo: EPA-EFE/ANDREJ CUKIC.

An agreement on partnership, trade and cooperation between Bosnia and Herzegovina and the UK was accepted by the Bosnian Presidency but without a consensus of all three members.

Brussels – Slovenia has produced a proposal to grant Bosnia-Herzegovina EU candidate status as early as at the EU summit next week. Foreign Minister Tanja Fajon will present it to her EU counterparts on Monday at a session of the Foreign Affairs Council in Luxembourg.

Ljubljana – President Borut Pahor has sent a letter to European Council President Charles Michel calling for Bosnia-Herzegovina to be granted the EU candidate country status without any conditions. Pahor believes this would strengthen the pro-European forces in the country and the pace of adjustment to the European norms.

The Serbian member of Bosnia's tripartite presidency, Milorad Dodik, on Monday said that Bosnian Serbs will respect Sunday's agreement signed in Brussels on building a peaceful and stable Bosnia. Although the agreement is not signed or legally binding, "it will be respected on the political and moral level", he said.

German Christian Schmidt has gone over the heads of Bosnian politicians to secure funding for an October election, signalling a more pro-active approach on the part of the international community.

The president of Bosnia and Herzegovina's Bosniak- and Croat-dominated Federation entity, Marinko Cavara, rejected allegations against him on Tuesday, one day after he and a minister from the Serb-dominated Republika Srpska entity were sanctioned by the US Treasury Department.

High Representative Christian Schmidt, who oversees the civilian implementation of the peace deal that ended the Bosnian war, imposed a decision on Tuesday to allocate funds for country's October elections, putting an end to weeks of failed attempts to ensure an adequate budget to hold the polls.

Over a month after the Central Election Commission of Bosnia and Herzegovina announced that a general election will be held in October, it announced on Monday that it has managed to borrow the money needed for the process. 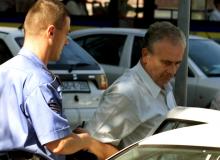 A decision by the Sarajevo Cantonal Assembly to name one of the streets in the Novi Grad municipality after a Hague Tribunal defendant, deceased Bosnian Army general Mehmed Alagic has been criticised by survivors of the 1992-95 war, international organisations and rights activists.

War victims' associations, rights activists and Western diplomats in Bosnia and Herzegovina have criticised a police ban on a march marking the annual White Ribbon Day in Prijedor, which is intended to commemorate the 30th anniversary of the start of wartime persecution by Bosnian Serb forces in the area.