Turkey needs to build Kanal Istanbul as an alternative seaway as the Bosphorus Strait's capacity will not be able to handle the increasing vessel traffic in years to come, Transport and Infrastructure Minister Adil Karaismailoğlu has said.

A Turkish prosecutor has drafted an indictment seeking up to 12 years in prison for each of the 103 retired admirals who issued a controversial statement in April to support the 1936 Montreux Convention.

Extreme winds of up to 130 kilometres an hour left hundreds of buildings damaged, trucks overturned, trees uprooted and roofs smashed on Monday and Tuesday in Istanbul and the Turkish regions of Thrace, Marmara and the Western Black Sea.

Classes have been cancelled in at least 10 provinces, including Istanbul, after a powerful storm has killed five people, left dozens of others injured, sank boats and damaged buildings across the country.

The Disaster and Emergency Management Authority (AFAD) said at least four people were killed and more than 40 were injured in Istanbul, one of the cities hit hard by the storm.

Storm heavily battered several provinces in Turkey on Nov. 29 particularly in the Aegean and Marmara regions, killing at least four people in Istanbul and another one in the northern province of Zonguldak, disrupting daily life as well as ferry and sea traffic.

Heavy fog led to a disruption of vessel traffic late on Nov. 6 in Turkey's Bosporus Strait.

The fog started to take effect on Nov. 5 evening, causing delays in air and sea traffic.

İstanbul Sabiha Gökçen Airport has been closed to air traffic.

Teknofest, Turkey's largest aerospace and technology gathering and one of the world's largest aviation events, kicks off today in Istanbul.

Before the five-day event, warplanes of the Turkish and Azerbaijani air forces made a salutation flight over the Bosphorus. 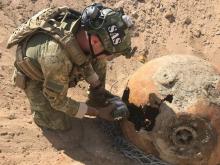 An exploded sea mine caught in fishermen's net in the Bosphorus has been detonated by the efforts of the military.

"A sea mine, which was caught in the net of a fishing boat and taken to a deck in the Bosphorus, was examined by an Underwater Defense [SAS] team and destroyed at the SAS Command/Riva destruction training area," the Defense Ministry said on Twitter.