Bulgarian Deputy Minister of Foreign Affairs Georg Georgiev has had talks in Ottawa with David Morrison, Foreign and Defense Policy Advisor to Canadian Prime Minister Justin Trudeau. It was reported that lifting of short-stay visas for Bulgarians in Canada has opened up new opportunities for contacts between people and business, BNR reported. 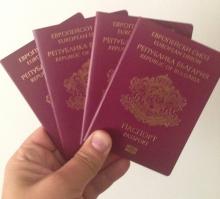 A total of 2953 foreign citizens were granted Bulgarian citizenship in the first five months of the year.

Since the beginning of the year, 1174 Macedonians have been granted Bulgarian identity documents on the basis of their Bulgarian origin.

As many as 96 653 children have been born into families of Bulgarian parents outside the country between 2004 and 2013, a recent "map" has shown.