A top executive at former President Donald Trump's family business pleaded guilty on Aug. 18 to evading taxes on a free apartment and other perks, striking a deal with prosecutors that could make him a star witness against the company at a trial this fall. 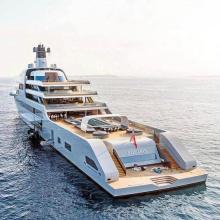 According to Luxury Launches, a website publishing stories about the world's jet set, the 55-year-old tycoon brought 67-meter-long "Garcon" and 55-meter-long "Halo" to the Aegean coastal district of Göcek.

The head of SpaceX and Tesla Elon Musk believes that all people on the planet should be chipped with a special chip in the head. He expressed this opinion in an article for the Chinese magazine China Cyberspace. In the text, he explained, among other things, why people should be chipped using his startup Neuralink.

The FBI recovered "top secret" and even more sensitive documents from former President Donald Trump's Mar-a-Lago estate in Florida, according to court papers released on Aug. 12 after a federal judge unsealed the warrant that authorized the sudden, unprecedented search this week.

The Australian Murdoch, who owns many of the world's most famous newspapers, is worth more than $17 billion, according to Forbes.

Former President Donald Trump called late Thursday for the "immediate" release of the federal warrant the FBI used to search his Florida estate, hours after the Justice Department had asked a court to unseal the warrant, with Attorney

Former President Donald Trump invoked his Fifth Amendment protection against self-incrimination as he testified under oath Wednesday in the New York attorney general's long-running civil investigation into his business dealings.

Elon Musk has sold nearly $7 billion worth of Tesla shares, according to legal filings published Tuesday, amid a high-stakes legal battle with Twitter over a $44 billion buyout deal.

The Tesla boss sold some 7.9 million shares between August 5 and 9, according to filings published on the Securities and Exchange Commission's website.

According to the Republican billionaire, his Mar-A-Lago resort estate is "under siege, attacked and occupied by a large group" of federal agents.

It is unclear at this time what the reason for the search is, for which agents have served a warrant.