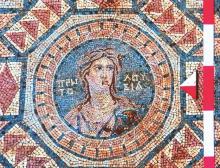 A mosaic that has been unearthed during excavations in the ancient city of Olba in the southern province of Mersin's Silifke district has been removed in 16 different panels and placed under protection.

According to a statement made by the General Directorate of Cultural Heritage and Museums, the mosaic was found by a Gazi University team headed by Professor Ay?e Emel Erten.

The fourth issue of MUSA, the quarterly cultural review produced by the press and communication office of the Greek embassy in WashingtonD.C., highlights Byzantine Thessaloniki in its current edition.

The restorer heading the reportedly ?botched? restoration of ancient mosaics in the southern province of Hatay has denied the accusations, saying even the smallest movement of stones would have changed the size of the mosaic.

At least 10 ancient mosaics held in the second largest mosaic museum in the world in Antioch, Turkey, suffered irreparable damages during restoration efforts.

At least 10 mosaics, held in the world?s second largest mosaic museum in Turkey?s southern city of Antakya, were seriously damaged during restoration, a local newspaper has reported.

The scandal erupted after local mosaic craftsman Mehmet Da?kapan brought the issue to the attention of a local newspaper in Antakya.

The Haleplibahçe Museum Complex, which will open in two months in the southeastern province of ?anl?urfa, is set to take visitors for a trip back in time.

Archaeologists should know on Tuesday or Wednesday whether a third figure is depicted in the mosaic found in the tomb being excavated in Ancient Amphipolis, according to a top Culture Ministry official.

Archaeological excavations in Hatay’s Issos ruins have come to an end this year. Over a 1.5 months of work, the most interesting finding was a Roman road right alongside mosaic floored area

Treasure hunters in a field in the Central Anatolian province of Karamanâs SarÄ±veliler district have damaged unique ancient mosaics underground, after using a caterpillar excavator in their hunt. The scandal was revealed by a teacher who had returned to his village during the holiday period.