Nowadays, some people read satirical and political cartoons in the newspaper or on their smartphones while sitting on the toilet, but in Antalya's Antiocheia Ad Gragum, such cartoons were illustrated on mosaics on the floor below the toilets in the ancient city's bathhouse.

The Hungarian government's response to a caricature in the influential Slovenian magazine Mladina underscores the point the almost-century old publication was trying to make, say those who work there.

The main opposition Republican People's Party (CHP) has collected its 13 suggestions to the government over its economic policies as well as its nine questions directed to President Recep Tayyip Erdoğan in a caricature album, featuring caricatures drawn by Turkish satire magazine Leman's cartoonists.

Education Ministry officials have admitted that none of the 18 officials in charge of controlling the text books saw an obscure caricature included in a Turkish language school book.

The caricature album of the late 19th century Ottoman bureaucrat and Minister of Foreign Affairs, Yusuf Franko Kusa Bey, who was also a governor general and a playful caricaturist, is being exhibited for the first time at the Koç University Research Center for Anatolian Civilizations (ANAMED). 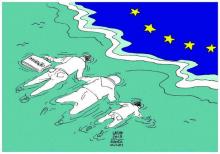 The world-renowned political cartoonist Carlos Latuff's works have been edited and published in a new volume by Turkish publisher Rodeo.

He has created several series of illustrations so far. This time he chose the theme of universal human rights and justice and illustrated how world leaders see justice.

The man who terrorized Danish capital Copenhagen on Saturday, by opening fire against two targets, a Free Speech event and a Synagogue, killing two people, is dead.

Early on Sunday, the Police identified the suspect near a train station. Realizing what was going on, the man opened fire. The police officers fired back and shot the man dead.