Angela Merkel's reputation has been damaged in Germany in recent weeks, writes the Telegraph. "After the invasion of Ukraine, former ministers who served in her tenure, in turn, renounce its foreign policy," the paper writes.
"I never thought in my life that we would enter into such a crisis with Russia," said Wolfgang Schuble, a former finance minister during Merkel's term. 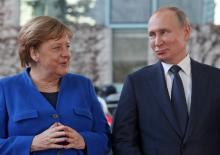 Former Russian President and Prime Minister Dmitry Medvedev, who is currently deputy chairman of the National Security Council, has threatened that Europeans will soon pay a high price for gas.

This was announced on Twitter by the director of the Financial Times department in Berlin, Guy Chazan.

Scholz pulls plug on Nord Stream 2. "The situation now is a different one". 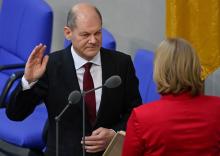 With a hit by the "godmother of punk" Nina Hagen, Germany's military saluted a visibly moved Angela Merkel during a ceremonial farewell on Dec. 2, just a week before she is due to bow out of politics after 16 years in office.

It's in the European Union's strategic interests to integrate the Balkan states into the bloc, German Chancellor Angela Merkel said on Monday as she urged Serbia and other countries in the region to do more on democratic reforms in order to join, AP reported. 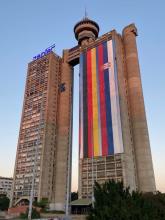 Preparations for her reception are nearing the end, and as part of this visit, the flags of Germany and Serbia were set up at the Genex building in New Belgrade, from the direction of the "Nikola Tesla" Airport, so that this would be the first sign of welcome for the German Chancellor.

Chancellor Angela Merkel's last trip abroad should take her to the Balkans. The media mention the meeting with the leaders of the Western Balkans in Tirana (September 14), but it is unofficially heard that the Chancellor could visit Belgrade beforehand. There is no official confirmation in Berlin yet.