Turkey's flag carrier plans to expand its network of international destinations and kick start a restructuring of its low-cost carrier brand AnadoluJet, according to Ahmet Bolat, the chairman of the board of directors and the executive committee of Turkish Airlines.

Turkish Airlines will resume some international flights this month to China, South Korea and the United States among other destinations, the airline said on June 12, a day after it began restarting such services.

Looking to restart domestic and international flights after a suspension due to coronavirus, Turkish Airlines has drafted a flight plan for June, July, and August, sources told Anadolu Agency on May 6.

Turkish Airlines will not operate any domestic or international flights until May 28, the company announced on April 28.

Turkey's national flag carrier said the decision to extend the suspension of operations has been taken in the public interest.

Turkish Airlines on April 3 announced that due to the continuing coronavirus outbreak, it will suspend all domestic service until April 20.

On the heels of earlier flight suspensions due to the virus, the national flag carrier's "limited number of flights to and from 14 major cities will all be canceled until April 20," announced Bilal Eksi, Turkish Airlines' CEO.

Turkish Cargo, a division of Turkey's national flag carrier Turkish Airlines, has boosted its capacity to prevent any supply chain disruption so it can carry critically important medical freight amid the coronavirus pandemic. 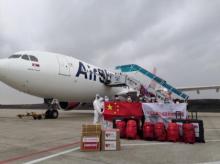 The first Serbian national airline to fly to China, the Airbus A330, is already returning from that country and bringing in doctors and medical help. The plane arrives in Serbia at 7.30 pm.

The second plane to China departed this morning at 6.15 am.

Turkish Airlines began operating flights to China in 1999, with Beijing as the carrier's first destination. Now the airline also adds Xi'an to its flight network, making the city the fourth destination in mainland China after Beijing, Shanghai and Guangzhou. 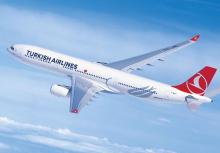 National flag carrier Turkish Airlines will launch service to Xi'an, northwestern China at the end of the year to mark its 20th anniversary of operations in China.