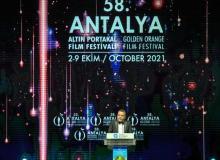 The 58th Antalya Golden Orange Film Festival, organized by the Antalya Metropolitan Municipality, kicked off on Oct. 2 at the Antalya Sports Center under pandemic measures.

Making a speech at the ceremony, Antalya Mayor Muhittin Böcek, who stayed intubated for months in hospital last year due to COVID-19, said that he was happy to be at this year's opening ceremony of the festival. 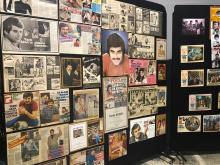 Tarık Akan, one of the most notable names of the "Yeşilçam" era of modern Turkish cinema, was commemorated at various events in Istanbul on the fifth anniversary of his death on Sept. 16.

Akan's family, veteran actors of the Turkish cinema industry and loyal fans of the movie star attended the commemoration ceremony held in Zuhuratbaba Cemetery in the Bakırköy district.

The 40th Istanbul Film Festival, organized by the Istanbul Foundation for Culture and Arts (İKSV) with the contributions of the Culture and Tourism Ministry, was closed with an award ceremony held at Hilton Istanbul Bosphorus Harbiye.

The winners of international and national competitions were announced at the event.

Turkish film "Flaşbellek" (Flash Drive), written and directed by Derviş Zaim, will be released in the south of France on July 12.

The film, which last year won the jury award at the "Cinemed Festival Cinéma Méditerranéen Montpellier," one of the important festivals in France, will meet with French cinema lovers in the regions of Languedoc, Aude Pyrenees and Aquitaine Nord.

Kemal Sunal, the comedy giant of Turkish cinema, was commemorated at his grave in Istanbul on the 21st anniversary of his death.

Yeşilçam's master director and screenwriter, Kartal Tibet, died on July 1 at the age of 83.

Actress Civan Canova announced the death of Tibet on his Instagram account, saying, "Goodbye, my brother Kartal. I will miss you so much." 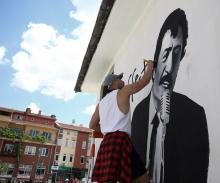 A local artist in the Central Anatolian province of Eskişehir has been painting the prominent actors of Yeşilçam, also known as Turkey's Hollywood, and unforgettable names of Turkish music on the walls of workplaces across the city.

In a statement, Kaplanoğlu said that the film industry around the world has been interrupted for a while due to the pandemic measures.

The Turkish Film Commission is making efforts to attract the attention of film companies to Cappadocia, which is a natural film set with its historical and cultural riches as well as its interesting geographical beauties.