The excitement was understandable. Dairo Antonio Usuga, better known in Colombia as 'Otoniel', was the country's most wanted drug trafficker, a former guerrilla turned leader of El Clan del Golfo, the biggest criminal gang in Colombia.

He was arrested in late October, 500 soldiers and 22 helicopters descending on his rural hideout in northwestern Colombia.

Colombia's government announced on Oct. 24 it is working towards extraditing the country's most-wanted drug trafficker "Otoniel" to the United States, a day after he was captured in a major operation in the jungle. 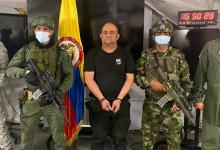 The newspaper "Semana" states that Otoniel, in order to form a network for illegal trade, established connections in Panama, Mexico, the Dominican Republic and Belgium. 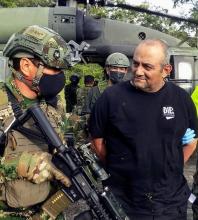 Colombian security forces have captured the country's most wanted drug trafficker, a rural warlord who stayed on the run for more than a decade by corrupting state officials and aligning himself with combatants on the left and right.

President Ivan Duque likened the arrest on Oct. 23 of Dairo Antonio Usuga to the capture three decades ago of Pablo Escobar.