Türkiye has drawn a roadmap for its fight against climate change, containing 217 decision steps under seven titles.

The roadmap has been determined following three months of studies carried out by Climate Council organized by the Environment, Urbanization and Climate Change Ministry. 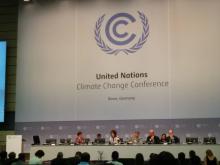 The life expectancy of the inhabitants of Greece due to air pollution is expected to decrease by about a year annually.

Hollywood's response to climate change includes donations, protests and other activism but it's apparently missing out on an approach close to home.

Only a sliver of screen fiction, 2.8 percent, refers to climate change-related words, according to a new study of 37,453 film and TV scripts from 2016-20. A blueprint for ways to turn that around was released on April 19.

Earth is calling. We must act now before it's too late

On Earth Day, let's stand up for the environment: together, let's make Earth's heart beat stronger to save our planet, our home.

Scientists have long been warning that extreme weather would cause calamity in the future. But in South America, which in just the last month has had deadly landslides in Brazil, wildfire in Argentine wetlands and flooding in the Amazon so severe it ruined harvests, that future is already here. 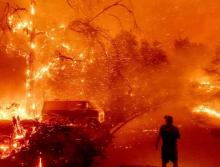 Deadly with extreme weather now, climate change is about to get so much worse. It is likely going to make the world sicker, hungrier, poorer, gloomier and way more dangerous in the next 18 years with an "unavoidable" increase in risks, a new United Nations science report says.

And after that watch out.

The European Commission's executive vice president for the European Green Deal, Frans Timmermans, is expected to pay a visit to Turkey this spring to discuss some key issues regarding the country's green transformation.

The highest glacier on the world's tallest mountain is losing decades worth of ice every year because of human-induced climate change, a new study shows.

As we find out, all the formal conditions for the opening of cluster 4 at the upcoming 13th Intergovernmental Conference planned for December 14 have been met.
As a reminder, cluster four deals with the "Green Agenda and Sustainable Connectivity", the cluster combines chapters related to transport, energy, trans-European networks, environmental protection and climate change.