In that capacity, Serbia will participate in the 2020 session in Glasgow, the environment ministry said.
At the closing of the conference, signatories to the UN Convention on Climate Change COP 25 in Madrid today, Serbia was also elected a member of the Convention Bureau on behalf of the Eastern European Group of countries, the statement added.

Coal-fired power plants in the Balkans are failing to hit toxic emissions targets and many face imminent closure if they continue to operate at current rates, the Energy Community warned on Monday in its latest report.

The United Nations Development Program (UNDP) and Hatay Metropolitan Municipality have joined forces to reduce greenhouse gas emissions at the local level, in a bid to tackle climate change issues and the effect of the high influx of migration on the environment.

Secretary of State Mike Pompeo announced today that he has informed the UN that the United States will withdraw from the Paris Climate Agreement, the AP reported.

This is the first official step in the 12-month procedure to exit the Global Climate Change Pact. In his message, Pompeo emphasizes that the document is an "unfair economic burden" on the US economy. 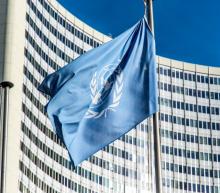 The United Nations has confirmed that this year's climate change conference will take place in December in Madrid after Chile abandoned its household over anti-government protests in the country, Reuters reported.

The conference, also known as COP25, will be held from 2 to 13 December, as scheduled, but in the Spanish capital.

The amount of additional revenues the government projects it will collect from the inclusion of new areas in the objective values system will determine the size of the new Single Property Tax (ENFIA) reductions planned for 2020.

Denmark and 10 other EU countries have called for the creation of a European strategy for the gradual decommissioning of diesel and petrol cars, including allowing the ban of sales at member state-level by 2030 to combat climate change, Reuters reported. .

Denmark made the proposal on Friday at an European meeting of environment ministers held in Luxembourg, BTA reported.

In a speech to the UN General Assembly, Morrison said Australia was fighting climate change and rejected "any insinuation to the contrary."

President Klaus Iohannis said on Wednesday, in New York, that climate change is a global challenge and showed that Romania's national strategy on this issue was designed with the aim to shape an economy resilient to climate change, with low carbon dioxide emissions, able of integrating climate policies through smart economic growth.