The Colectiv tragedy remains a "difficult" lesson, "a deep wound" in the memory of Romanians that requires a strong sense of responsibility on the part of all, dismissed Prime Minister Viorica Dancila said on Wednesday. "October 30, 2015 has gone down in our memory as one of the saddest days, when the destinies of dozens of young people were ended.

Premier Viorica Dancila announced her support for the Colectiv club fire victims' law change proposal so that they should have their medical care costs covered for as long as needed. "I received the letter of the victims of the Colectiv club tragedy and in the last days we looked for solutions to offer them the support they need.

Pope Francis arrived on Friday in Romania for a historic three-day visit between May 31 and June 2.

The head of the Catholic Church was welcomed at the main airport by Romanian President Klaus Iohannis and his wife along with Romanian Orthodox clerics, officials and hundreds of people with messages of greeting. 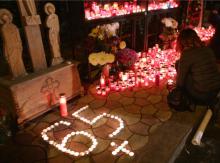 Victims of the Bucharest rock club fire that killed 65 people and injured hundreds in October 2015 expressed outrage on Monday, as a court in the Romanian capital failed to assign a new judge to the case following the retirement of the previous judge.

One year and three months after the tragedy in the Colectiv disco in Bucharest which killed 64 people and caused mass protests and the resignation of the former government, the capital of Romania was rocked by a similar incident on Saturday morning but no victims have been reported.

A popular night club burnt up and over 40 people were taken to the hospital, reported Reuters. 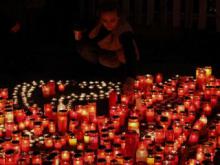 The final expert report into the causes of the fire at the Colectiv nightclub in the Romanian capital, which caused the death of 63 people, will be published early next month at the latest, according to the experts compiling it.

Protesters booed Romanian President Klaus Iohannis as he visited the participants in the demonstrations in Bucharest on Sunday.

Iohannis went to University Square on the sixth day of protests to talk to participants in the demonstrations.