Sri Lanka said on April 22 it was invoking emergency powers in the aftermath of devastating bomb attacks on hotels and churches, blamed on militants with foreign links, in which 290 people were killed and nearly 500 wounded. 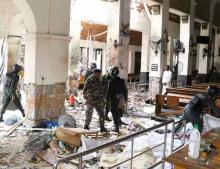 A string of blasts ripped through high-end hotels and churches holding Easter services in Sri Lanka on April 21, killing at least 207 people, including 35 foreigners.

Police in Thessaloniki have arrested 2 Romanian citizens, a 34-year-old man and a 27-year-old woman, for migrant trafficking.

Silversea has released details about its seven-continent World Cruise 2020. The ultra-luxury cruise line will complete its 62-port itinerary with a selection of events, shore-side excursions and expedition-style experiences.

The United Kingdom's decision to quit the European Union will not change her status as a global power and her ambitions in foreign policy, a high-ranking British diplomat has said, stressing that British diplomacy is preparing for the new era by re-focusing on the kingdom's ties with its traditional allies, like Turkey, and the 52-member Commonwealth.

More than 80 people, mostly children, were kidnapped from a school in the city of Bamenda in western Cameroon early on Monday, government and military sources said, reports Reuters.

No one immediately claimed responsibility for the abduction in the English-speaking region where separatists are fighting to form a breakaway state.

"Unfortunately (...) the negative tints regarding Pakistan are exaggerated, which has the unpleasant consequence of creating some reservations at the level of the Romanian business community in connection with the security of some possible businesses or cooperation projects with Pakistani companies," Ambassador of Romania in Islamabad Niculaie Goia said in an interview with AGERPRES, underscori

Kenya's champion Brimin Kipkorir has withdrawn from Sunday's Nairobi International Marathon and will instead compete at the more lucrative Athens Marathon on November 11.

Kipkorir, who clocked a time of 2:12.39 in winning last year's event, said he has been forced to choose between the two races and believes he has more to prove in Greece.