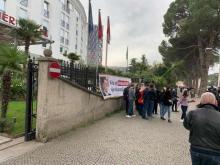 Serbian President will visit Tirana on Friday and Saturday, where he will take part in the "Mini Schengen" Summit.
In front of the hotel where the President of Serbia is supposed to be staying, a banner was put up, with the inscription "Here comes a war criminal, disguised as a benefactor".

Maloku commented on a meeting that took place on Sunday between Albanian Prime Minister Edi Rama, Serbian President Aleksandar Vucic and North Macedonia Prime Minister Zoran Zaev in Ohrid. For him, it was a play that posed no danger to Kosovo, but it was meaningless until the participating countries recognize Kosovo.

The European Stability Initiative, a think tank focusing on south-east Europe and EU enlargement, said in its latest report that Brussels should dismiss the idea of what have been touted as 'border corrections' between Serbia and Kosovo and put pressure on Belgrade to stop its "war-mongering" rhetoric.

He stressed that the citizens of Serbia "have to be aware that without the effective and comprehensive normalization of relations between Belgrade and Pristina there will be no accession to the European Union." 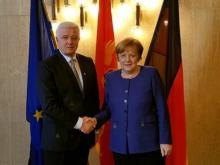 Montenegrin Prime Minister Dusko Markovic will be hosted by German Chancellor Angela Merkel on Friday in Berlin, in his first official visit to Germany since he took the post in 2016, with Podgorica's bid to join the EU expected to be discussed. 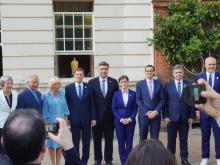 The reception was organized by Prince Charles for the participants of the Western Balkans Summit.

The Serbian president Vucic asked the German chancellor to use here reputation and authority to speed up the realization of these two projects.

In a phone conversation, Vucic told Merkel that he believes the Regional Economic Zone and the construction of the Nis-Pristina highway is of great importance to the Western Balkans.

The summit in London will bring together the leaders of the Western Balkans and most European officials who will discuss economic cooperation with a focus on the region, the security and challenges of the migrant crisis, the future of the "Berlin Process" and the current political developments in the region. 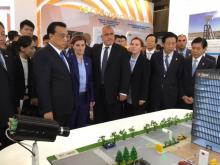 Brnabic said in a speech addressing the participants of the summit in Bulgaria that Serbian President Aleksandar Vucic, while he was head of the Serbian government, recognized the importance of strengthening our relations with China and initiated the strengthening of friendly relations and cooperation in all segments.