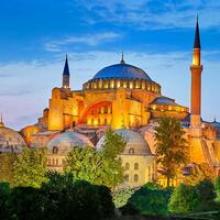 Istanbul's Hagia Sophia Museum remained Turkey's most visited tourist attraction in 2019, according to data released by the Culture and Tourism Ministry. (Alamy Photo)

A five-story concrete hotel built on Istanbul's 1600-year-old city walls and a historical fountain draws anger of the residents in Cankurtaran neighborhood.
Some stones of the fortification wall, on which serious destructions are noticeable, have been unhitched and the faucet part of the fountain has been removed.
Also, some parts of the fountain have been destroyed.

Hundreds of buildings at high risk have been evacuated due to a planned urban transformation project in Istanbul's Fikirtepe neighborhood are being rented by foreigners and Turkish citizens due to low prices. 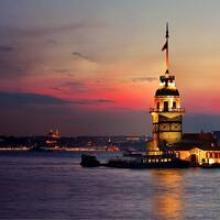 The Mental Health Association, a Turkish-based non-governmental organization, has found the Maiden Tower in Istanbul is where the users of a smartphone application found the most romantic place in Istanbul, Turkey's largest city. 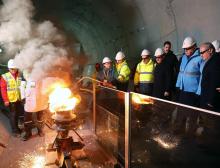 Construction began on Jan. 18 on a new high-speed metro line connecting the heart of Istanbul to the new mega-Istanbul Airport.

The new line, set to be finished in August 2021, will whisk passengers from Gayrettepe, in Şişli, on the Turkish metropolis' European side, to the new airport in just 35 minutes.

Turkish hackers on Friday claimed to have hijacked the official webpages of the Greek Foreign and Finance ministries, the National Intelligence Service (EYP), the Athens Stock Exchange and the Parliament, Greek media reported.
Authorities took down the pages to protect them.

The Environment and Urbanization Ministry on Jan. 17 approved the report on environmental impact of Turkey's planned megaproject, Canal Istanbul, an official said.

The Environment and Urbanization Ministry on Jan. 17 approved the report on environmental impact of Turkey's planned megaproject, Kanal Istanbul, an official said.

The family of Festus Okey, a Nigerian asylum seeker who had been murdered at Istanbul's Beyoğlu police station in 2007, will join the criminal proceedings after 13 years of a legal and bureaucratic struggle.

Okey was detained on Aug. 20, 2007 on charges of drug possession and was brought to the Beyoğlu police station. He was fatally shot by Yıldız after his interrogation.

Nearly 511,700 houses were sold for the first time while the remaining were second-hand sales from January to December.